Simple camera movements can make a big difference to the look of your video project. But getting the same precise movement time after time can be difficult. Then along comes the Yelangu AutoDolly – a tabletop motorised dolly/skate that can help you add impact to your videos, with minimal effort.

The Yelangu AutoDolly is a simple device. A small motor powers a single wheel, whilst two other articulated wheesl allows the AutoDolly to move in a curved or straight line. In the middle sits a base with a 3/8 inch and 1/4 inch screw sockets allowing a camera to be mounted. A thread adapter is included for directly mounting a camera. However, it more than likely that you will want to mount a small ball head first and mount your camera to that. 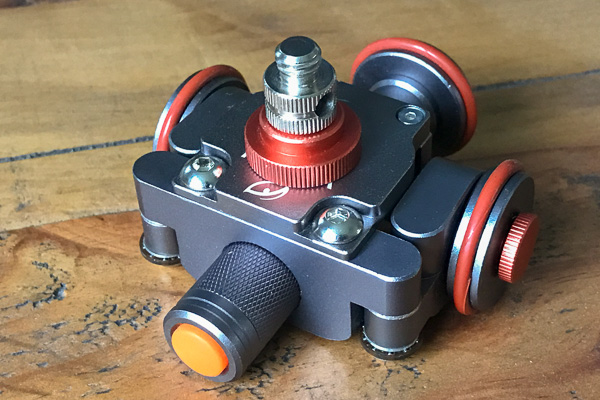 Once everything is set up, there is a single on/off button that powers the device, To operate, simply press the button and watch your camera roll away.

Made in China, and available through Amazon or eBay, the Yelangu AutoDolly is also available with Andoer branding. So quite who exactly is manufacturing the device is a little unknown. However, a factory somewhere in China has developed this great little device.

The AutoDolly is a well made. It has a sturdy aluminium body, with large hex bolts holding everything in place. The bolts also make it easy to tighten should anything work loose, and a wrench is included to do this. 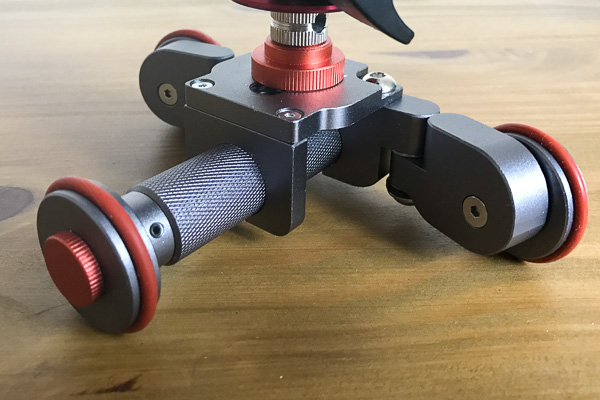 The motor is housed within the central cylinder, which powers a wheel. The two additional wheels are articulated to allow it to move in a curve

There are a few quirks to the construction of the AutoDolly though. The power button on my one did occasionally pop out of the battery compartment. The button easily popped right back in place, but it is a little annoying. Another quirk is the fact that to reverse the direction of the motor you have to reverse the position of the battery. Anyone who remembers their electronics lessons in school will know that this makes the motor run in the other direction. It is simple to  swap the battery round, but surely they could have developed a switch to do the same thing?

Using the device is very straightforward. The hardest thing is balancing heavier cameras and lenses, but even this is straightforward. The centre wheel can be moved back and forth, and a micro-positioning plate could also be used for absolute perfection. I found that the AutoDolly could easily hold a small Manfrotto ball head, with a Sony A7R and 24-70mm f/4 lens. In fact Yelangu claim it can move up to 6KGs. Whether you could balance a camera and lens that weighs that much is a different story. 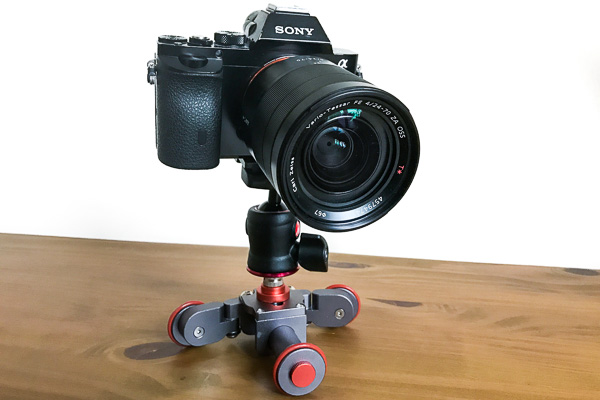 There are couple of improvements that could be made. Having a choice of speeds would be great. A faster speed would be useful for more dramatic movements, whilst a slower speed would mean that you could use the AutoDolly for timelapse footage. Currently it travels at around 1m per minute, so timelapse sequences are really restricted to shooting at 1fps. This means they are only really useful for shots with people moving in them. To create any meaningful length of timelapse footage a reasonably large surface is needed. A set of tracks would be a useful optional extra, and I’m sure we’ll see some ingenious DIY projects creating tracks for the device.

On a similar note, the option of some more rugged tyres would be useful. I’m not talking about all-terrain tyres for going over mud, rock or even grass, but it would be nice to use the AutoDolly on a surface that was quite perfectly smooth, like a tarmac’d path. Again, this could be an easy enough addition without changing the main design.

Overall the Yelangu AutoDolly performed well. Priced at between £40-65 depending on where you buy it, it is a reasonably priced piece of kit.

When folded down, the Yelangu AutoDolly is small enough to fit in a coat pocket

It can move anything from a smartphone to a enthusiast level DSLR. The smooth movements it creates can help add variety to your videos. But you are restricted to using it on smooth floor or table tops. For vlogging and travel videos this should prove useful enough.

Watch our video review above to see it in use.

BROUGHT TO YOU IN PARTNERSHIP WITH HIRE A CAMERA