Anybody involved in filmmaking will know of Steadicam. The company’s stabiliser revolutionised filmmaking camera movements over 40 years ago. Now Steadicam has become a generic term for image stabilisers. For the next generation of filmmakers, the company has announced its first motorised stabiliser for smartphones. The Steadicam Volt has been around in one form or another for a while, but it has finally launched at CES 2017.

Designed in partnership with drone manufacturer, Yuneec, the Steadicam Volt combines physical balanced stabilisation with motorised stabilisation. The result is a device that looks a lot like the Steadicam Smoothee, with a unit containing the gyroscopic motors that keep the smartphone steady.

Accompanying the Steadicam Volt is an iOS and Android app that allows for precision tuning of the way your device is balanced. It is also bluetooth enabled, although it doesn’t currently use bluetooth for anything – it’s just there to help future-proof the device. In addition the Volt’s lightweight and folding design enable easy storage and transportation. 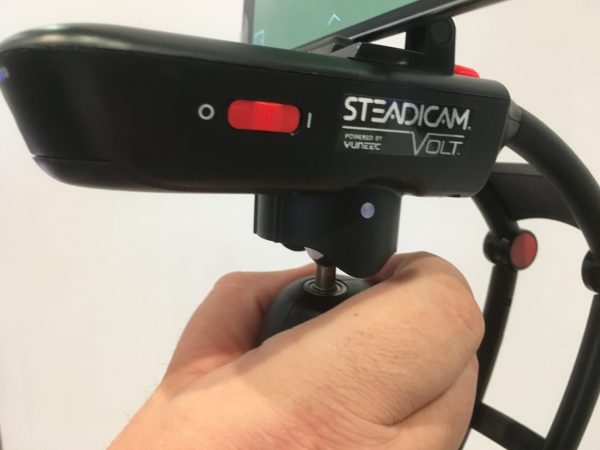 CES 2017: The Steadicam Volt combines the best of balanced stabilisation, with gyroscopic motor

Powering the Steadicam Volt is a lithium ion battery that lasts for up to eight hours. What is really useful is that if the battery does die, then the mechanical stabilisation will continue to work as a manual device. The Volt’s phone holder can accommodate phone sizes up to the size of an iPhone 7 Plus.

Rather than a conventional release, Steadicam have launched the device on Kickstarter.

Early backers can take advantage of a CES 2017 offer and get the Steadicam Volt, 5x Magnetic and 1x Starter Balance, 2x batteries, Charger, Micro USB cable, Quick Start Guide and a carry pouch for $119 (plus $20 postage to the UK). Ordinarily this package would be $199.

The Steadicam Volt is due to start shipping in June 2017.

Back the project on Kickstarter

Find out more at www.tiffen.com/steadicamvolt