There’s been speculation, rumours and even a sneak peak at Photokina (watch our Photokina video), but the Panasonic GH5 has been officially released and we’ve got all the key details.

First up is a new 20.3-million-pixel sensor, increased from 16.05-million-pixel sensor in the Lumix GH4. However, this new sensor isn’t just about an increase in resolution; there’s now  no anti-aliasing/low-pass filter in front of the sensor, which should increase sharpness.  A lack of low-pass filter can result in moire pattering, but the resolution of the sensor, combined with a new Venus processing engine, should keep this to a minimum. We’ll look forward to seeing just how good fine details are when we get our hands on a full review sample of the camera.

The new demosaicing process samples the photodiodes on the sensor from a 6×6 area – typically demosaicing takes place from a 2×2 grid. The result should be improved colour detail and definition, and it should also help reduce noise levels.

The combination of sensor and the new Venus engine offers a new noise reduction engine, called High Precision Multi Process NR. Panasonic claim that the new system offers up to 4x the noise identification of its predecessor.

Interestingly, despite the improved noise reduction processing, Panasonic has chosen not to increase the sensitivity range. The GH5 has a sensitivity from ISO 200-25,600, exactly the same as its predecessor.

One thing that has improved is the autofocus and its speed. There are now 225 focus areas, compared with 45 on the GH4. Focus can also now be achieved as quickly as 0.05secs, as opposed to 0.07secs on the GH4. This increase in speed has had a knock-on effect to the speed of continuous shooting with AF. The  12fps fixed focus shooting rate is the same as the GH4. However, continuous shooting with AF is up from 7fps to 9fps with the GH5. Similarly an increase in the processing speed and buffer allows for over 100 raw files to be captured before the shooting rate drops.

Whilst the rumour sites speculated that the Panasonic GH5 would shoot 6K video, this isn’t quite the case. What the GH5 can do is record a short burst of 6K video at 30fps, with the user then able to extract an 18-million-pixel still image from this. Panasonic have had a 4K Photo feature in its cameras for the last year or so, but 6K Photo takes it to the next level. The difference in the image size is from 8-million-pixels with 4K Photo, to 18-million-pixels with 6K Photo. Many may baulk at the idea of 6K Photo, but when you think of it as a 30fps burst mode saving 18-million-pixel images, it is an impressive feature.

4K Photo has also been improved with by the more powerful system in the Lumix GH5. It can now shoot at 60fps. That’s 60fps for 8-million-pixel images. For some types of photography, these new shooting modes could change the way images are captured. 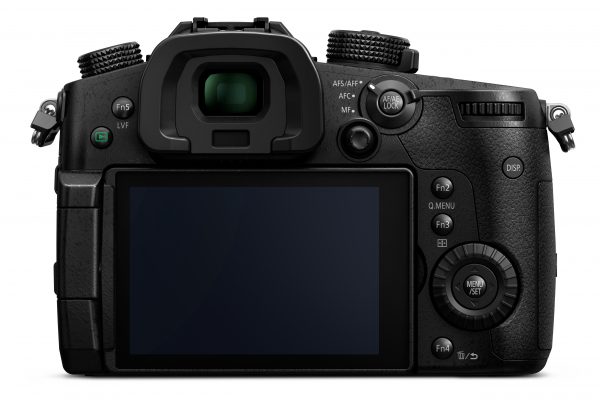 Another notable improvement is the GH5’s new 3.68-million-dot electronic viewfinder. This is a resolution increase 2.36-million-dot EVF found in the GH4. However, the resolution isn’t the only increase, the magnification is also significantly larger at 0.76x compared to 0.67x. It doesn’t sound like a huge difference, but is noticeable when the camera is held to the eye. On paper it is one of the best electronic viewfinders that can be found on any camera. As usual, we’re looking forward to seeing just how it doesin our full test.

The size and resolution of the rear viewfinder has also been increased. Like its predecessor, the GH5 has an articulated, side mounted, touchscreen, but at 3.2inches, it is slightly larger than the 3-inch display of the GH4. The resolution has also been improved with the addition of white dots. The white dots sit alongside  the standard RGB ones, creating a 1620k-dot display. The  purpose of the white dots is to increase the brightness and colour range of the LCD screen.

Since the original GH1, the GH line of cameras has been the pinnacle of Panasonic’s photo and video camera line up. In fact because of the size and quality of the video, the GH cameras are hugely popular for filmmakers, with each generation adding new features. For the GH4, 4K video was the key selling point. The GH5 takes this a step further by being able to record 4K video with 4:2:2 10-bit colour internally. This may not mean much to the average photographer, but the increased colour sampling and bit rate means that there is much more colour information. More colour data means the footage has more flexibility when colouring it.

As you would expect, the GH5 can also record Full HD 1080p footage at up to 180fps. This means that you can shoot 7x slow motion by slowing the 180fps down to 25fps in post production.

For more details in the GH5’s video features see the extensive overview at News Shooter.com

Besides the 6K Photo mode and the extensive video capture options, the other key feature of the Lumix GH5 is the 5-axis image stabilisation. We have previously seen just how good Panasonic’s 5-Axis stabilisation is in the GX80 and we can only assume that the GH5 uses the same technology.

For photographers Panasonic quote a 5EV difference in usable shutter speeds when shooting handheld with the 5-axis stabilisation. This puts it on a par with the recent Olympus OMD-EM1 Mk II, which Olympus quote as having up to 5.5EV stabilisation.  We’re looking forward at putting these cameras head to head and seeing which system comes out on top.

For videographers the 5-axis system should make it possible to shoot handheld without the need for a monopod or tripod in many situations. For documentary videographers it could make the GH5 there go to camera for this type of work.

With so much video and still image data to deal, the GH5 has not one, but two SD card sockets. Both of these are compatible with UHS-II U3 memory cards.