Google sprang a little surprise during the launch of its Pixel 2 smartphone and other hardware earlier this week. It came in the tiny form of the Google Clips camera.

Aimed squarely at young families, Clips is designed to capture those candid moments with all the family in the shot.

The idea is to leave the camera be and it automatically records 15fps in short sequences called Clips, when it recognises family members entering the scene.

Clips uses Google’s Assistant AI to recognise faces. The company has thrown around other terms like Machine Learning (ML) and Moment IQ too.

Unlike other devices such as Google Home, Google Clips is a self-contained camera that doesn’t need the cloud to function. Yes, the ML tech is internal, not cloud-based.

Facial recognition data is kept in camera. So, the more the device is used, the more intelligent it becomes. It recognises smiles and apparently wagging tails of our most common pets.

According to Google, at this stage, its Assistant AI is limited to facial recognition and the like. It doesn’t understand the world in general so will not work well for your holiday snaps. There are plans to expand the AI to understand more situations.

Recorded images can be viewed on the Google Clips app. The company says the camera doesn’t send footage unless you manually do so through the smartphone App.

Google says privacy is paramount and there is no built-in microphone in order to protect identity. 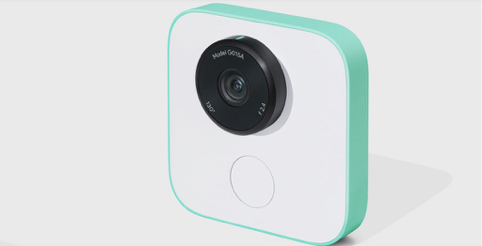 On the outside, Google Clips is small, square and simple. From what we can see of the product shots, there is a f/2.4 wide-angle lens with 130° field of view and a single button to start recording.

Clips features 16GB internal storage and will record for up to 3 hours with the built-in USB rechargeable battery. It uses Intel’s Movidius and extremely low power vision processing unit (VPU).

The 59.5g Gorilla Glass encased camera is placed in a housing with a clip that allows you to attach the camera to a variety of surfaces – a chair, post, banister and the like.

The response has been mixed, with Google Clips being labeled ‘innovative’ and ‘creepy’. We think it’s a really interesting concept, especially the tech inside the camera.

However, more importantly, we wonder in reality how precious those family moments will really feel from a camera with no sound that essentially resembles a webcam.

What do you think of the concept?

We do not have information on a release date yet, but Clips retails at $249 and you can be put on a waiting list for the product on the Google Store.