Boasting USB 3.0 transfer speeds and up to 2TB worth of storage, DFi Gear Flash Porter has recently smashed through its $15,000 funding goal, and it has currently raised over $81,000 on Kickstarter.

The Flash Porter is a straightforward device. It is a hard disk drive, with built-in battery, card readers, LCD  and Wifi connectivity. The CompactFlash, SD and Micro SD card readers allow for direct transfer of photos and video to the device’s hard drive. There’s an incremental back-up option that gives you the option to only transfer new images that haven’t previously been backed up.

If your camera uses a CFast 2.0 or XQD cards, then no problem. A card reader can be connected to the devices USB 3.0 socket. The same socket can also be used to backup photos and video from a smartphone or tablet. For the ultra paranoid/cautious, the Flash Porter can itself be back-up to an external hard drive. Currently JPEG files, and most proprietary raw formats are supported. 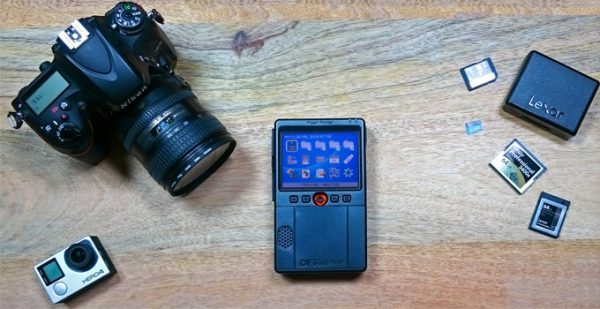 When the Flash Porter goes in to production it will be available in 500GB, 1TB and 2TB versions costing $299, $349 and $449 respectively. Solid State Drives will also be available in the same capacities, for $499, $799 and $1,399. Not only will SSD drives be faster, but with no moving parts they provide a more robust solution for backing up your images whilst travelling. If you already have your own 7mm thick SATA drive then there is a drive-less version that will cost $249.

DFi Gear claim that the device can transfer 250GB of data on a single battery charge, and it is possible to buy additional batteries for the device. WiFi connectivity rounds off the key features of the Flash Porter, The final goal of the Kickstarter project was to implement WiFi connectivity. This was achieved and will allow the transfer of images from the Flash Porter to a smart phone or tablet.

We hope to get our hands on full review sample of the DFi Gear Flash Porter when they go in to full production early in 2017.

Keep checking www.dfigear.com and KickStarter for more updates on when the Flash Porter will be on general sale.