We first saw the Aputure Light Storm 300d (LS C300d) at NAB 2017 in Las Vegas earlier this year, where it was named the Best Lighting Product of the show. Needless to say, we have been keen to see the official launch of the product. That time has come.

So what impressed the folk at NAB? Well, Aputure’s flagship COB light, the Light Storm 300d, is the company’s most powerful LED light yet and is backed up with an impressive set of features. Let’s run through what you need to know about Aputure’s new light.

• Wireless remote with up to 150m range 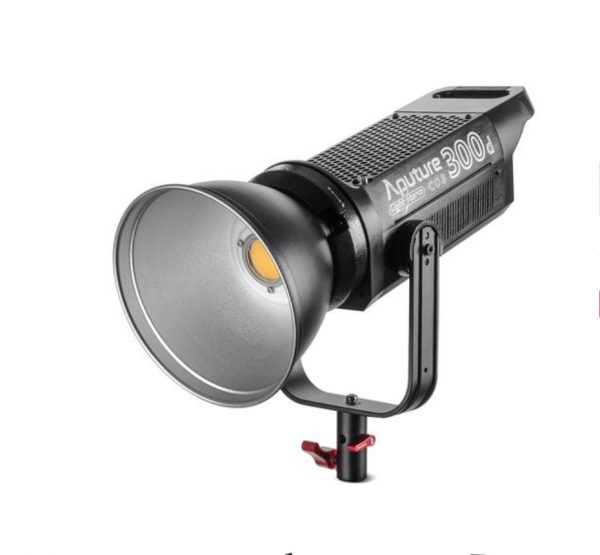 LED lighting technology has come on a long way and the Light Storm 300d is a Chips On Board (COB) LED light type. A COB light appears as one solid hard light, rather than lots of individual LEDs.

Aputure has measured the light temperature to an accurate daylight balanced 5,500 kelvin, guaranteeing a CRI rating of 95+ and TLCI rating of 96+. That’s more than good enough for broadcast quality.

The light’s control box is separate from the power ballast and allows users to independently change things like brightness, remote channels and fan speeds. These lighting controls can also be changed wirelessly with the remote, with up to 150m range.

All the power of tungsten, with all the benefits of LED – which we will go into next.

Despite its 2,000-watt equivalent tungsten light output, the LS C300d only draws 300 watts of power. You’ll be able to use six of these lights with the same power draw as one tungsten. Not only is it 85% more power efficient, but LED lights typically boast a longer shelf life.

The aircraft-grade aluminium light is also 75% lighter than a typical 2,000-watt tungsten light, weighing in at 2.1kg. Users will be able to hold and modify this portable light with a single hand.

Speaking of modifying, the LS C300d features a universal Bowens mount to attach accessories such as fresnels and softboxes. You’ll be able to attach any Bowens mount light accessory, though Aputure has made accessories of its own, including two softboxes of different sizes.

Aputure claims the light’s cooling fan system is quiet down to 18db at its maximum speed and will prevent the light from ever getting too hot to handle.

The LS C300d can be powered either via AC mains or by mounting either 2 V-Mount or 2 Anton Bauer batteries for location shoots. 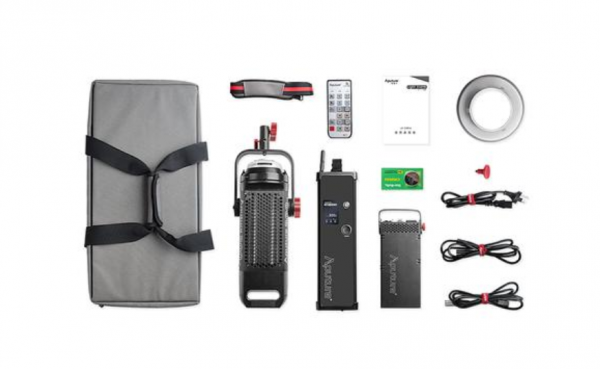 The Light Storm 300d is available with UK shipping shortly via B&H or Adorama, or now via the Aputure website. It comes shipped in a portable canvas bag and costs $1099 – which Aputure claims is less than a third of the price of its main competition.