We wrote about the first firmware update of the GH5 back in May, version 1.1. At this point, Panasonic stated its intent on a further firmware upgrade later in the year. Right on cue, the company has released the GH5’s firmware version 2.0, announced at IFA 2017.

Version 2.0 firmware will be released at the end of September 2017 and can be downloaded on the Panasonic website.

Panasonic has mainly consulted professionals to ascertain what was most in demand. What then are the resulting areas that Panasonic has continued to improve in its flagship Lumix GH5, through firmware version 2.0?

Well this is no small upgrade. There are no fewer than 11 notable improvements across both photo and video, plus a handful of extras too. We’ve listed the key upgrades below and then added the detail as sent to us by Panasonic – there is a lot of technical information to wade through.

• Improved usability of Power Save LVF 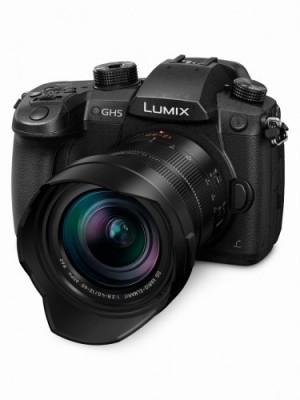 • [HLG] (Hybrid Log Gamma) is added to [Photo Style]. HDR (High Dynamic Range) is a mode to reproduce both the bright part and dark part in an image, making it appear as the human eye would see. The camera records video with a designated gamma curve compatible with ITU-R BT.2100, and users can now choose Hybrid Log-Gamma (HLG) in [Photo Style].

• A low bit-rate 4K HLG recording mode 4K HEVC for HLG has been added. This enables playback on AV equipment compatible with the HEVC compression format, such as Panasonic 4K HDR TVs.

• [Anamorphic Desqueeze Display] has been added, which lets you view an enlarged image in Cinescope size while recording with 2.0x and 1.33x Anamorphic lenses.

• [Video Guide Line] has been added to display the image in a variety of aspects, such as Cinescope, 16:9 and 1:1 while recording video. It can be used not only in Anamorphic mode but also in other video recording modes.

• The customised AF area can be continuously displayed in [Multi AF] and [Custom Multi AF] during live-view.

• The AF area in [Multi AF] can be moved to the other edge (side, top or bottom) when it reaches one edge.

• The start point of AF lock can be set on the live view screen in advance of [AF Tracking].

• The AF area can be moved while the shutter button is half-pressed or while recording in [Burst Mode], [6K PHOTO] and [4K PHOTO].

The new firmware enables GH5 tethered shooting via USB, using “LUMIX Tether” PC software. Users can control the camera by connecting it to a PC via a USB. It lets you view the image on a large PC screen while shooting, which is helpful in commercial photoshoots of products and portraits etc where continuous confirmation is required.  Using [6K PHOTO] or [4K PHOTO] users can start and stop video recording with the tethered shooting. It is also possible to choose the folder to save the image files to the PC.

• [I.S. Lock(video)] has been added. This compensates for handshake when the viewing angle is fixed.

• A new handshake correction mode has been added, which provides optimum correction when using 2.0x and 1.33x Anamorphic lenses.

• The waiting time to start the next burst shooting sequence after [6K Burst] and [4K Burst] is shortened to less than half the time.

*Use of Panasonic SD Memory Card with Video Speed Class 90 is recommended for [Loop Rec] of [6K PHOTO].

• The time to finish shooting and the number of recordable pictures are displayed on the stand-by screen.

Improved usability of Power Save LVF

• Power Save LVF can now be used during all stand-by display options.

• When the K (Kelvin) value was changed after adjusting the colour temperature with 2-axis white balance compensation, the setting was reset. This bug has been fixed.

• The Bluetooth Remote Control function can be used with Image App, which will also be updated at the same timing with the GH5 firmware release.

• A rating function using a Fn button is available in Playback Zoom and Multi Playback.

• The DISP.Button can be locked.

• In Relay Rec, there were cases where the video file number was not able to be reset. This bug has been fixed.

• In Relay Rec, there were cases where the video file number was reset after formatting the SD Memory Card. This bug has been fixed.

• In Backup Rec, there were cases where the file number did not reset even after applying the resetting function. This bug has been fixed.

For more information explaining some of these updates, please visit the Panasonic Lumix G Experience website.